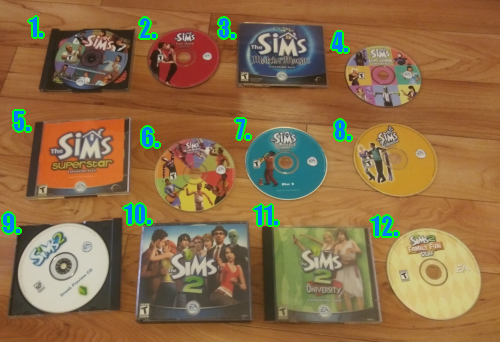 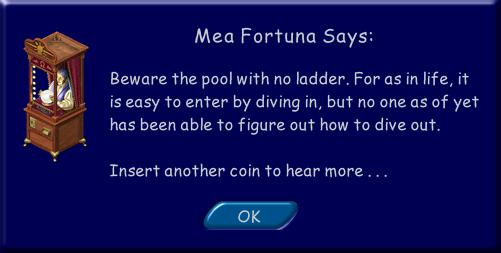 ITS THE SIMS!!! This was THE 2000's PC gaming experience! Initially, it scared the CRAP out of me, it notoriously had scary sound effects, creepy phone calls in the night, and weird clown curses! Eventually, I got over this and was absolutely obsessed! I especially loved the Makin Magic' expansion; you could cast spells and hatch dragons. literally so cool! And yes, before you ask, I have removed the ladder on occasion! Can you blame me though? Sometimes the sims bring it upon themselves, I didnt tell them to use the fireworks so conveniently placed inside of the house! >:3c 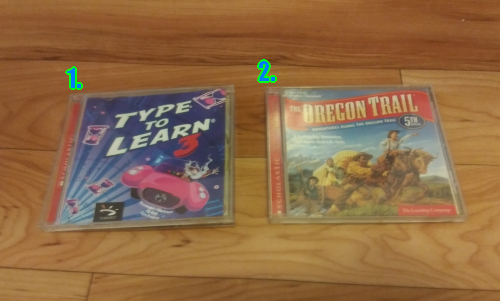 I'm pretty sure public schools still do this, but I got these CDs from those Scholastic book fairs way back when. Basically, public schools would partner with the Scholastic company and sell their products to raise school funds. For a week or so the school would distribute scholastic catalogues, YES catalogues XD! They don't make those anymore, right? You would get this little card and an envelope, write down the codes for each item you wanted, put it in the envelope with some cash and hand it to your teacher. BAM in two weeks your teacher gives you the items! If you didn't want to wait, the schools also hosted an actual fair where they sold off scholastic items as well as any old things the school could scavenge up. I remember one of the teachers brought in this homemade jar thing, he would swirl it around in his hands and the water inside would form a vortex! I think I only ever bought 2 things from the fairs themselves, the first was one of the Captain Underpants books and the other was some weird YA post-apocalyptic book The Eleventh Plague, that must have been a gateway book because now I really enjoy reading anything remotely dreadful! Some books that come to mind now are Metro 2033, A Roadside Picnic, Slaughterhouse-Five and anything Poe wrote. 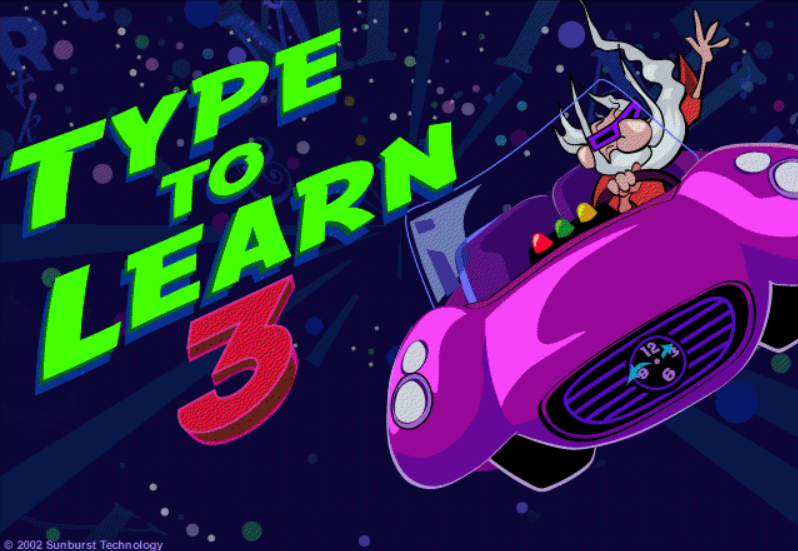 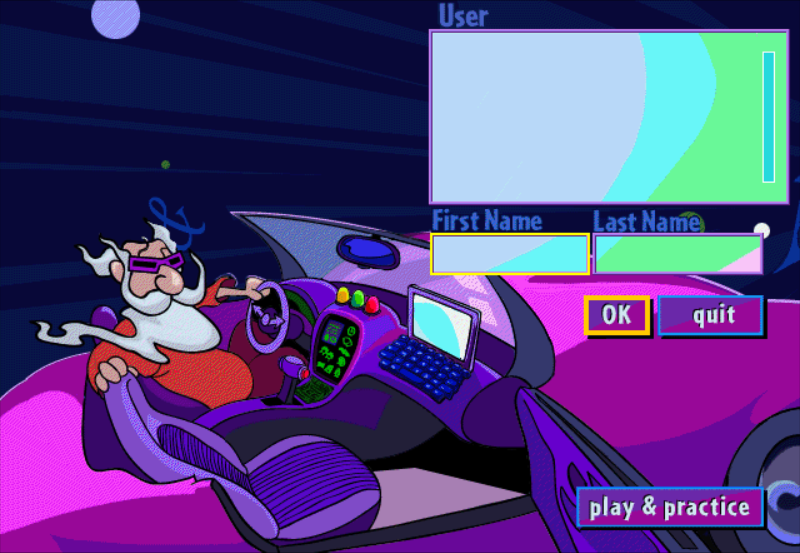 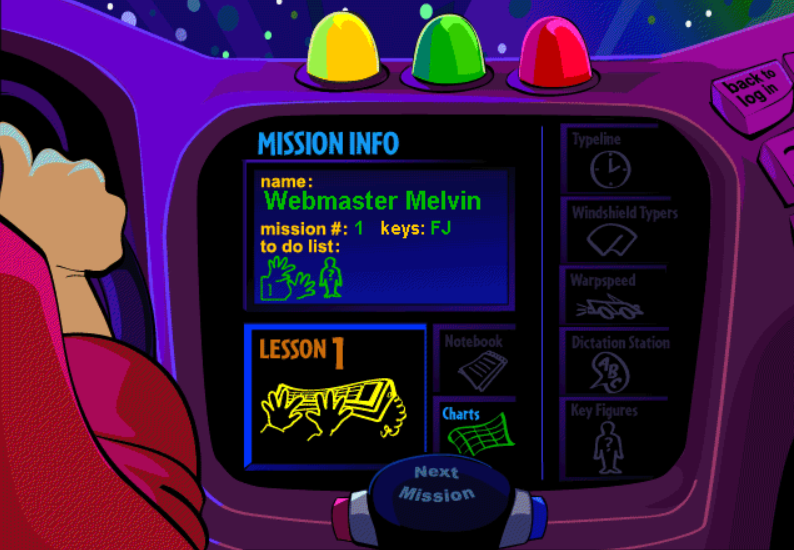 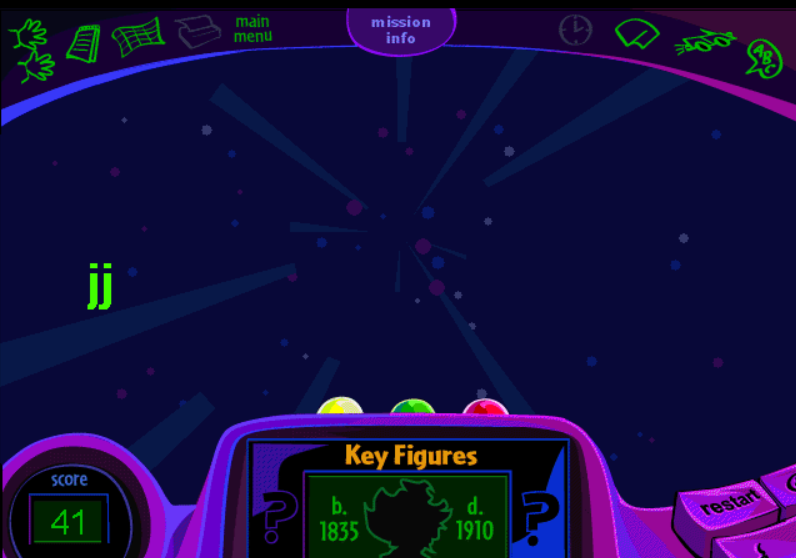 Type to Learn was a game you could find in most computer labs. It was how they taught students to be efficient typers. I kind of liked the game, I enjoyed playing it and working on my typing speed, I just never liked how the teachers wanted us to play it. The teachers very specifically wanted us to maintain a set position on the keyboard, each finger strategically on a key and each keystroke done in a specific manner. I've always been unorthodox (I mean look at me, I run a website! >:3c), I wanted to type how I felt was natural, I even bought the game just so I could practice my way at home. To this day I type quite oddly, I start with an index finger and just let muscle memory take over. It's all second nature at this point. I don't mean to brag BUUUUUT I can type without looking, even while holding a separate conversation! Is there a moral here? Maybe! Teaching is one of those things requires flexibility, everyone learns differently, and I should know, I spent a good amount of my time at college as a TA and tutor! 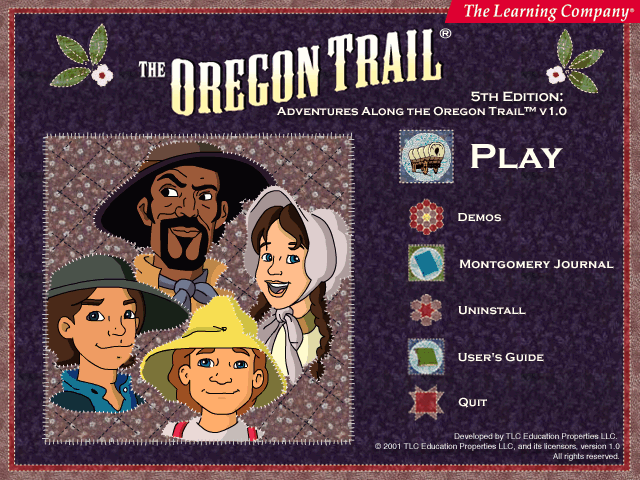 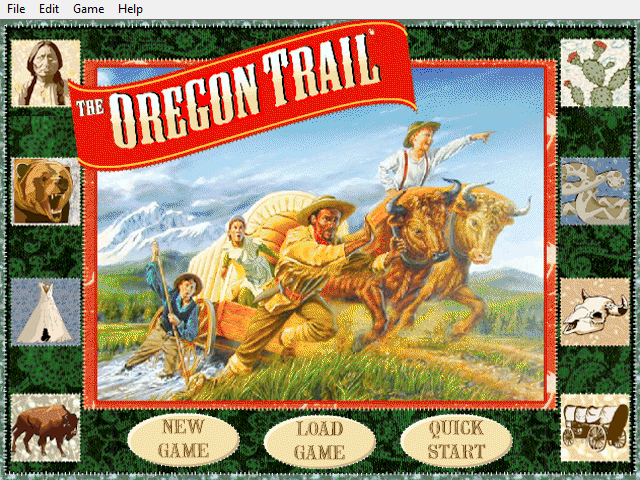 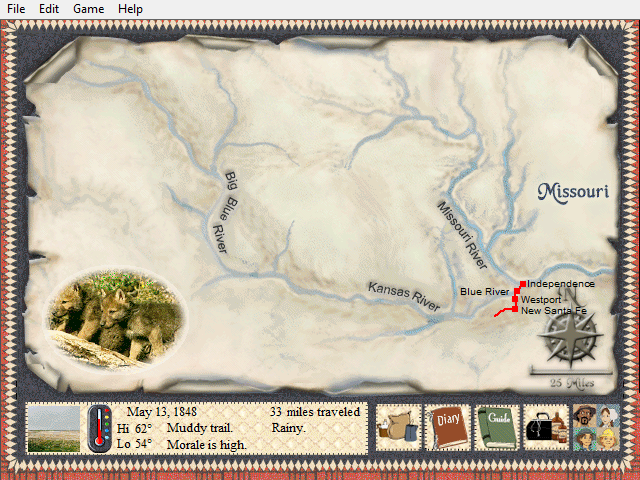 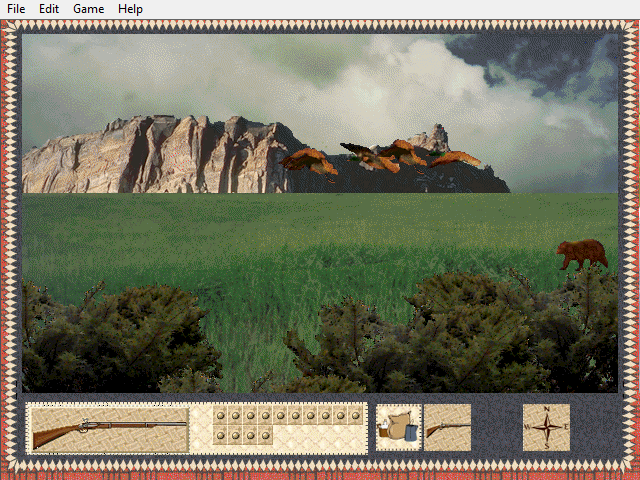 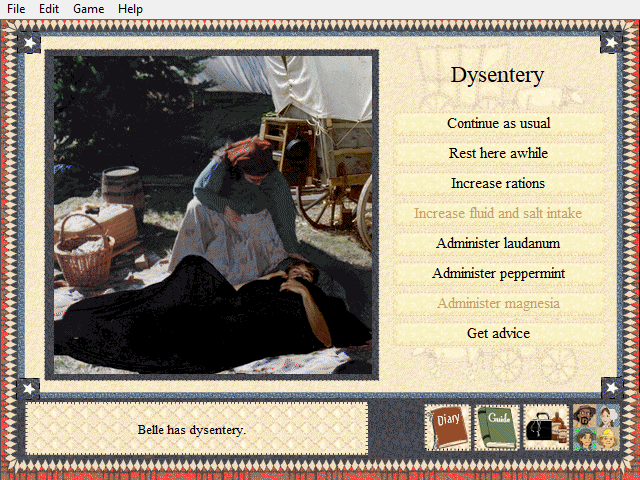 The Oregon Trail is a classic! One of the very few edutainment games that is actually fun to play! If you haven't heard of this game, it's basically a simulation of traversing the Oregon Trail back in early 1800's America. At its core, the game is a resource management RNG type of deal; your goal is to survive the trail with as many pioneers as you can while you will hunt, trade, and make choices in randomized events. Guess you could call it a roguelike (Even though the series predates Rouge lol). The Oregon Trail has been a staple of American school computer labs for several generations, the original version released way back in the 70s and has been remade several times over the years. The version I bought from Scholastic was the 2001 5th edition, it played about the same as the 3rd and 4th editions but had an overarching story with animated cutscenes! The 5th edition was sadly the final PC release, there were a couple of mobile games, but the series has since died down into obscurity. It's a real shame but let's be honest they don't make any more edutainment games for a reason! While The Oregon Trail was an exception, they just weren't that good and didn't really teach much. Ask me about the real-life Oregon Trail, all I can tell you is that a lot of people probably had dysentery! 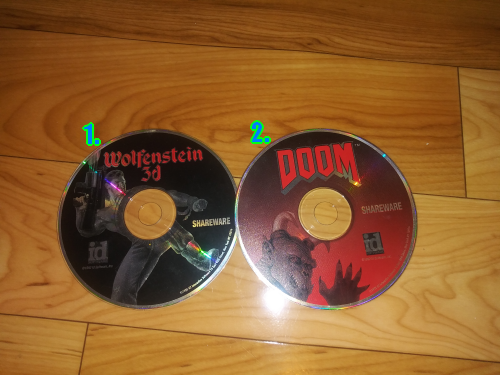 Remember when you could just walk into a video store and grab a free demo disc? No, I can't either, that was a little before my time XD. These shareware CDs came into my family's possession via a hand me down from one of our neighbors. Coincidentally, they also gave us their old computer so we could use them! Doom is literally my childhood game, me and my mom would play it for hours on end! I fondly remember how real the game was to us, we would always lean side to side when strafing, and do little jumping movements when we had to cross a gap. Honestly, we legitimately played it like how people act in those old video game commercials x3 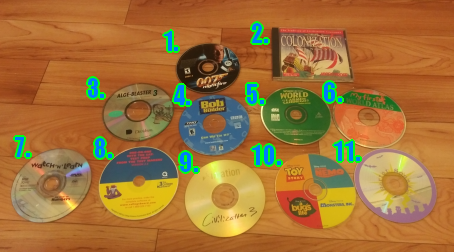 1.[007 NightFire] When I was younger, I loved everything 007... Except the movies LOL! In my defense. they are slow, and there's just way too much flirting. I'm a simple dude I want to see sneaking and shooting not kissing and undressing! Now the video games however, I was a sucker for em. My first 007 game was NightFire on the PC. This one really drew me in as a kid, this was the first game I ever played that had such nifty tools! A watch that shot a laser beam to burn locks, a pen that could shoot darts to silently eliminate enemies and A CELL PHONE THAT WAS A GRAPPELING HOOK?!?! Now that I think about it, all the first person 007 games were extremely difficult! NightFire was no exception. The second level must be infamous as it really throws all the annoying mechanic tropes at you. First you gotta sneak into an airfield where any detection is a game over, then you have to guardian snipe for an AI companion, and after a quick shooting section you have to defend a plane from an onslaught of enemies in every direction! If you were a bad enough dude to survive that, you were treated to what I think is the best level, the Japanese estate! This map had a lot of enemies to fight, things to break and a lot of open space to explore!

9.[Civ 3] You a cop or something? Why do you want to talk about my totally legitimate copy of Sid Meier's Civilization III?!

10.[Disney Pixar CD Storybook] This CD came with a Pixar storybook, which was basically a condensed retelling of each movie. The CD itself was just a read aloud, like an audiobook. I know this stuff was kind of a fad, but I really adore the time when everything had to incorporate electronics/tech in some way; Electronic storybooks like Leapfrog, interconnected toys like Cube World, Physical toys with online components like Neopets or Webkinz and even something as simple as Wendys putting game discs in kids' meals! This was a simpler time before such practices became so exploitive like wi-fi connected juicers and subscription-based airbag vests!

There were also a few other PC games I can recall from memory, the CDs must have been thrown out :/ 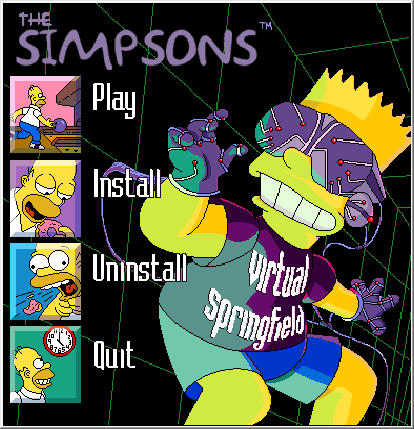 When I was like 5, we got this Simpsons "VR" game where you could explore Springfield, I loved it so much! There were tons of minigames to play and characters to talk to! The Simpsons was really popular with my family, we didn't have cable TV so we would always watch The Simpsons on a local channel every day after I got home from school. 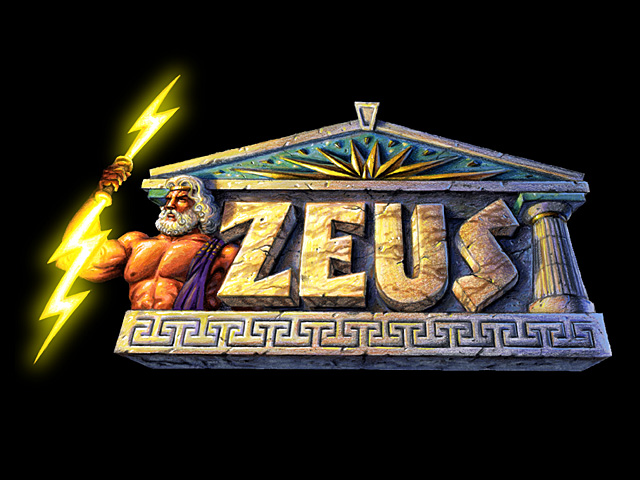 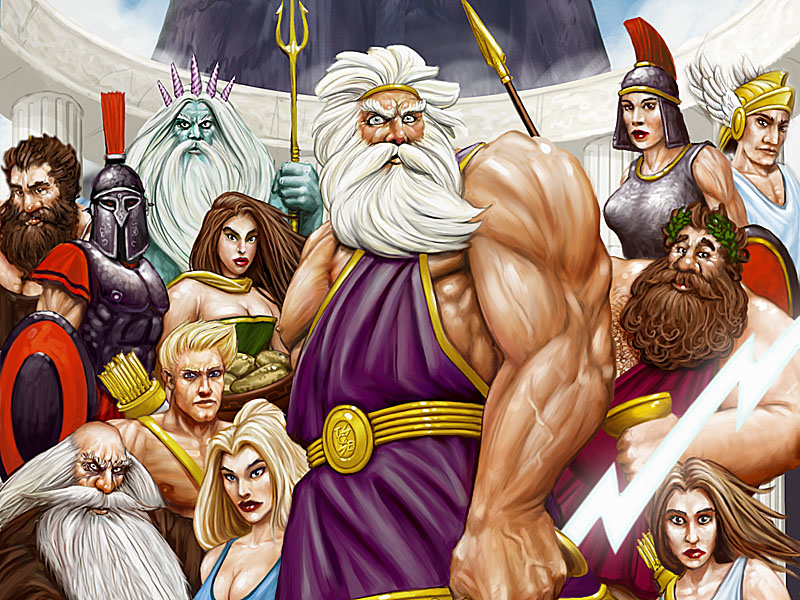 I got this this city builder game as a gift once, Zeus Master of Olympus. It came in perhaps one of the coolest PC boxes I'd ever seen! Well, in fact the only actual PC box I'd ever seen at that point! The CD itself was also striking to me, It had a similar color and glare to something you would see on a PS1 disc. I recently got a new copy from GOG and I am absolutely in love with it. Now that I'm an adult I actually understand what the hell is going on XD. I would defiantly recommend it to anyone who likes city builders! "Has anyone seen my spear? How can I be a spear carrier without my spear! "